The Buddha, as young Prince Siddhartha, was a rich spoiled brat.

His father, the king, groomed his future heir. Pampering and sheltering the prince,  he kept him within the kingdom’s gates, forbidding exposure to the imperfect world beyond.

Yet, like Eve’s irresistible appetite for apples, Siddhartha, led by his Channa his charioteer, ventured beyond the gates, where he saw four sights that were, to him, unfathomable.

“What is this,” Buddha asked Channa, as they encountered a sick man, an elderly man, a dead man and an ascetic. “Does this happen to everyone?”

Shaken and stunned, the prince renounced his gilded life, and sought truth. Through decades of trials, failures and near-starvation, he suffered, rather than deny or merely witness the suffering of others. Acceptance led to enlightenment.

Like Siddhartha, my young life was sheltered and pampered. I was a spoiled brat, crying over a bad hair day or because my boyfriend sent daisies instead of roses.

A few decades ago, a major trauma broke me. Though others had endured similar and worse tragedies, I lacked perspective.

Hey, pain and suffering ? Does that happen to everybody? Well. It wasn’t supposed to happen to ME! The tectonic plates shifted under my feet and I drowned in tsunamis of depression.

Blaming other people helped. It’s fun to rant and rave to friends, who get riled up with you. I feared everything, had multiple phobias and five panic attacks. I indulged in obsessions, expensive and narcissistic therapies, hoping something or some ONE could fix me. Nothing put me back together.

Our first impulse is to shelter ourselves, in material, sensual and personal rewards. We fight to get what we want. And even if we get “it” – money, the perfect house, car, children, dog, etc., something is missing.  Band Aids – Botox, Viagra, Zoloft, alcohol etc., don’t stick, so we divert to entertainment – the latest TV show, celebrity gossip, zombies, vampires, and gratuitous violence – anything to avoid sitting still in front of a mirror.

In the past three months, I’ve had three major losses. Any one would rank high on a scale of major depression triggers. I’ve lived through death, sickness, suffering, and it still continues.

Yet, I’m more content and at peace than ever in my life. Why now in middle age, a time that I once considered life would be over, at least the good parts.

The difference is this: I’ve learned to walk through these fires, rather than dance around them. It’s a new approach, and still a work in progress, but this acceptance has taught me a few simple, yet life-changing truths:

1.    Everybody suffers, often with no apparent reason

2    The only person I can change is myself. The only one who can help is me

3.   If I sit still, open up my intuition and listen, I can see clearly and act, rather than react.

4.    Like Rene Descartes, I question everything. Everything I’ve been told or told myself. Question and let go of what “should” happen.

5.    Forgive everyone –  they don’t deserve it, but through it, I free and forgive myself.

6.    Pain is my best friend. Without embracing it, I would seek nothing higher than pleasure – pain’s phantom twin. Both are illusions, both impermanent.

I’ve wasted much of my life in fear. Right now, in this moment, I’m unafraid (well LESS afraid.) of the cycle of birth, life and death. Birth and life are waves, building, cresting, breaking. What comes before, and after, is a calm sea – still waters where we all began and will all return. Love is the moon above, gently guiding.

As this summer and my own life shifts into autumn, I may be finding an Invincible Summer.

In the midst of hate, I found there was, within me, an invincible love.

In the midst of tears, I found there was, within me, an invincible smile.

In the midst of chaos, I found there was, within me, an invincible calm.

I realized, through it all, that…

In the midst of winter, I found there was, within me, an invincible summer.

And that makes me happy. For it says that no matter how hard the world pushes against me, within me, there’s something stronger – something better, pushing right back. – ALBERT CAMUS 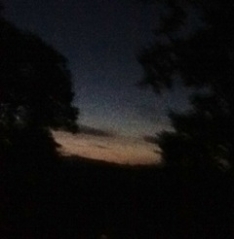 more than one way to skin a cat

boy with a hat

writing as a way of life

Laura Quick's book The Quick Guide To Parenting is available to order on Amazon. A perfect gift for parents.

Nail Your Novel - Writing, publishing and self-publishing advice from a bestselling ghostwriter and book doctor

Straight talk from the sisters about blood, sweat and ink

Reading you under the table since 2012

wisdom in one sentence
Sharon Lyn
Here There and Everywhere

Surely some revelation is at hand.